The Directives are explained in detail below:

Currently, the error handling directives can not be used out of the scope of an error-handling route and Integromat currently does not offer a Throw module that would enable you to easily conditionally generate (throw) errors, though a workaround can be employed to mimic its functionality.

When an error is handled by the Break directive, a record is created in the Incomplete Executions folder which stores the state of the scenario execution along with data from the prior modules. For each bundle of data that causes the error, a separate record is created.

The record references the module where the error originated and contains information regarding what data was received by the module as input. Read on about Incomplete Executions here.

Here, you may resolve the error manually by updating the scenario (if needed) and running it once.

With this option enabled, when an error takes place, the incomplete execution is retrieved (after the time specified in the Interval between attempts field) and executed with the original input data. This will repeat until the execution of the module completes without an error or until the Number of attempts specified is reached. 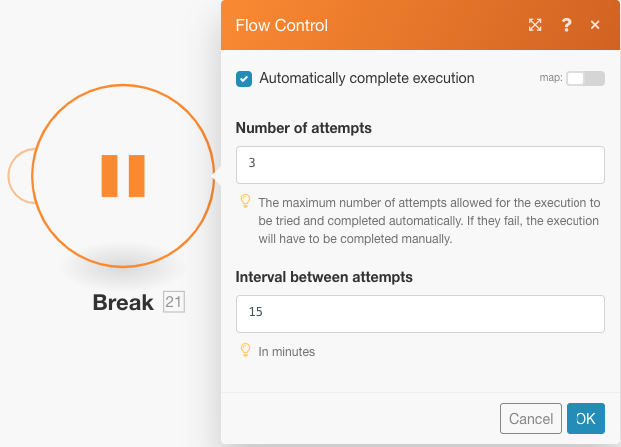