The majority of Integromat apps rely on 3rd party services, particularly on their APIs (Application Programming Interfaces). As the services evolve, so do their APIs. New API versions are being released regularly and old versions are being deprecated and eventually shut down. We closely follow releases of new API versions and implement new apps based on the latest APIs. During their lifecycle, apps can go through up to four phases:

Apps in the Beta phase are labeled with beta tag in the list of apps in the Scenario editor:

Even though each app had been thoroughly tested by our QA team before it has been released, some minor issues can still slip through. Please, do not hesitate to report these issues.

The beta tag can also denote that the API the app is based on is marked by the 3rd party service as beta. Please refer to the app's documentation for further details on this matter.

If our QA team is quite confident about the app and the underlying API, the app skips the Beta phase completely and starts with the Stable phase.

Once a new app version (or an alternative app) is available, the old app proceeds to the Deprecated phase. The Deprecated phase is indicated by the green icon with white arrows on the app's modules in Scenario editor. 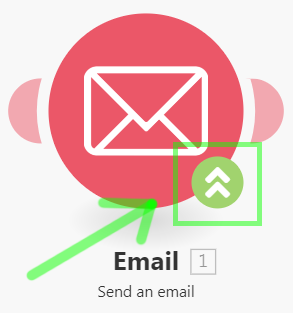 In the list of apps in the Scenario editor the Deprecated apps are suffixed with (legacy):

Apps in the Shutdown phase no longer operate according to their specification.

Before the Shutdown phase of an app starts, we always send an email to all customers that have the Deprecated app in their scenarios and ask them to replace the Deprecated app with an alternative (usually a new version of the app). However, we highly recommend not to wait for the notification about the app shutdown and start upgrading your scenarios as soon as you spot the green icon with white arrows (indicating the app's Deprecation phase) to avoid last moment surprises.

Other articles about Modules (8)