What this scenario does: Retrieves tickets in Zendesk, compares the ticket’s descriptions to predefined keywords (apps) and if there’s a match, the apps are added to Airtable.

Doing some market research on what your users or customers are asking about the most? How about which apps they need the most content on? Well that’s exactly what this scenario does by retrieving the apps users mention in tickets for further analysis. Of course, you can adapt it to fit your specific needs. So let’s begin.

The scenario starts with the Zendesk > Watch tickets module. First you need to add a connection to Integromat. In the Watch field, you have the option of selecting Only new tickets or All changes. Select Only new tickets and under Status, select New: 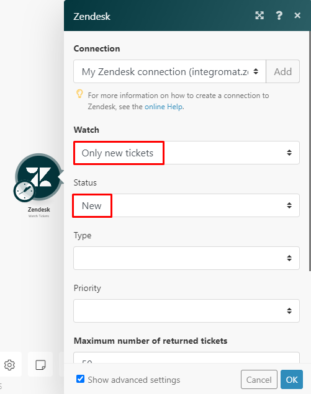 Now you need to retrieve the user’s details which is required for Airtable. In order to do that, add the Zendesk > Get a user module and simply map the Requester ID element outputted by the Watch tickets module to the User ID field: 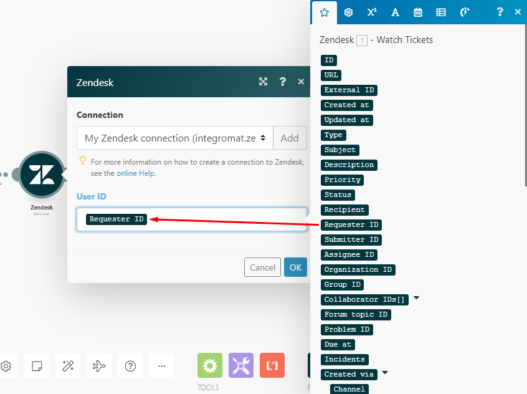 The next step is to separate each word in the ticket’s description in order to match them to the predetermined keywords added to the subsequent modules. 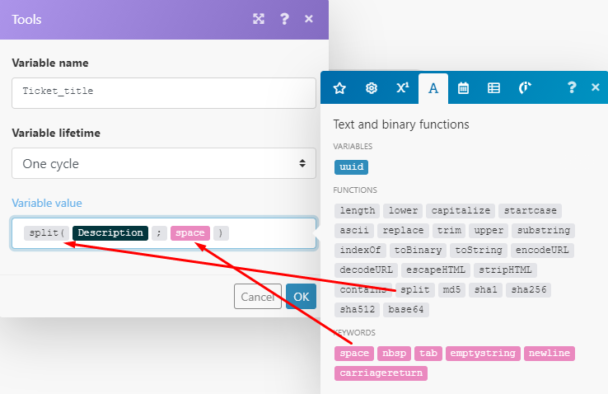 A Router follows splitting the scenario into 2 routes. The top route is for keywords which are actually various apps and the bottom route is specifically for e-commerce apps.

Let’s look at the top route. Since you want to verify if the ticket’s description contains these keywords, you need to add these keywords to the Tools > Set variable module to create an array containing a collection of them.

Under the Function for working with arrays tab, select the add function, then map the emptyarray element and enter the keywords in the brackets: 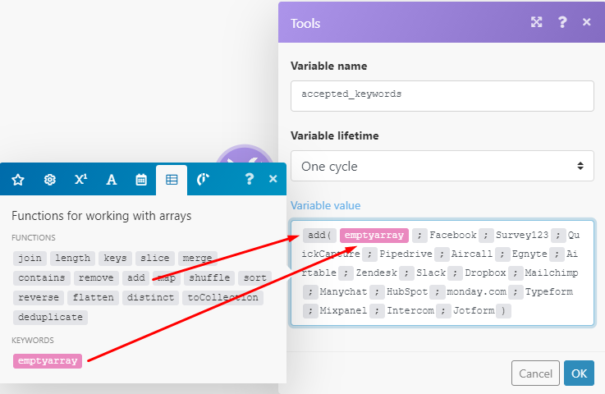 Next you need to iterate through the ticket description array created by the first Set variable module in order for it to be used in the subsequent filter. Add an Iterator and simply map the variable (Ticket_description in this case) element to the Array field: 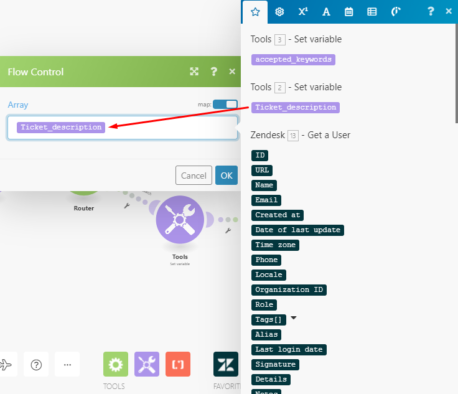 Between the Iterator and the Tools > Text Aggregator is a filter: 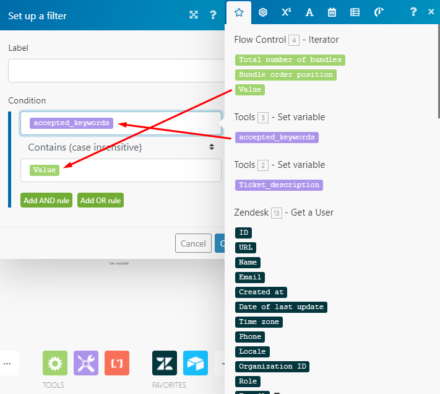 Select the Iterator as the Source Module, Other as the Row separator and enter a comma (,) as the Separator. Also tick the Stop processing after an empty aggregation option: 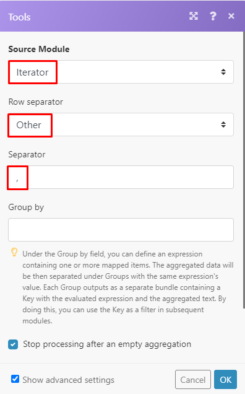 In the advanced settings, simply map the Value element outputted by the Iterator to the Text field: 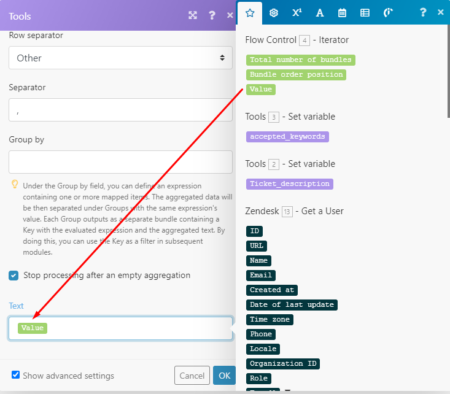 In the Airtable > Create a record module, select the Base and the Table. Then, map the relevant elements outputted by the Zendesk > Get a user module to the corresponding fields in the table: 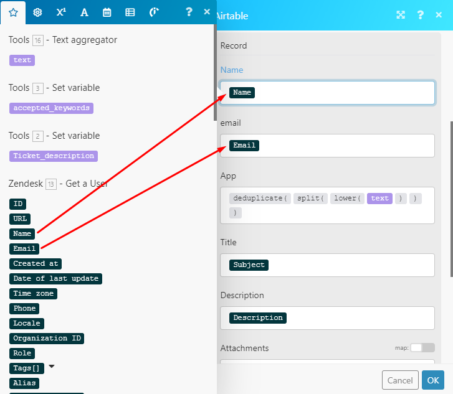 In most cases, apps will be mentioned multiple times in a ticket which results in duplicates being added to the table. To avoid this, you need to use several functions.

First add the deduplicate function to the App field: 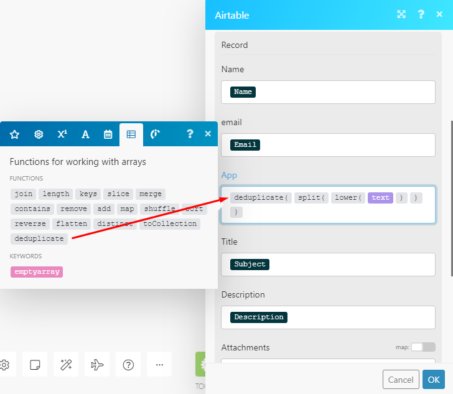 Next, add the split and the lower function. The lower function is used since in most cases when users type the name of an app multiple times, some may begin with a lowercase and others with uppercase. 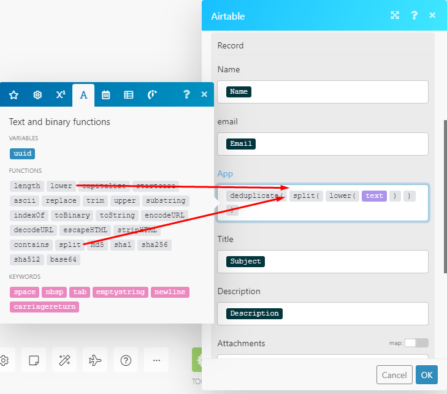 Lastly, map the Text element outputted by the Text Aggregator within the brackets: 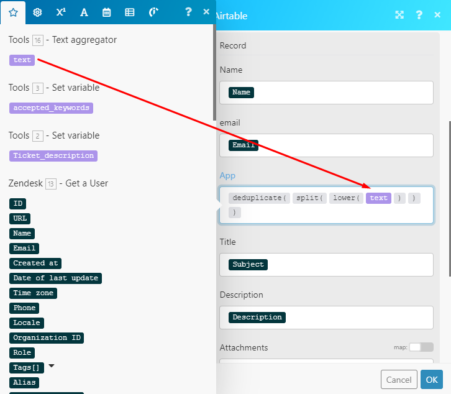 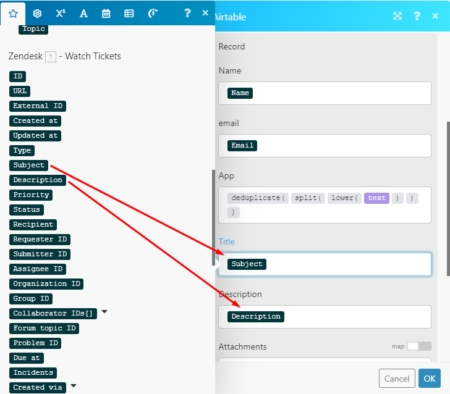 Moving on to the bottom route..

The only difference between the top and bottom route is that the Set variable module contains Ecommerce apps (keywords): 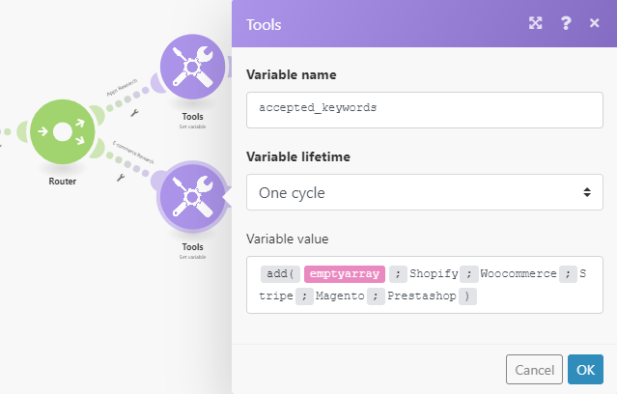 The rest of the modules have the same configuration as those on the top route.

Here, 10 tickets were retrieved from Zendesk, the apps mentioned in the ticket’s descriptions matched 2 keywords on the top route and 3 on the bottom route:

The apps were added to the table:

Tada! Hope you found this tutorial useful and will implement it soon.

Every Tool You Need to Build Without Code
Facebook Offline Conversions for Dummies
Gems, Curiosities, and Must-haves from the No-Code Industry

From Zapier to Integromat: Reasons To Switch and Never Look Back

Zapier has been a pioneer in the automation space, but a lot of users looking for advanced features ...

A Ticking Clock for Digital Ads: Exploring the Potential Effects of the Next Cookie Phase-out

Third-party cookies will soon be phased out in Google Chrome. How will this change affect users, ...

Shopify, Magento, WooCommerce and more: Learn about the best 5 ecommerce platforms in 2020, and ...